Three superfit North East cyclists are aiming to raise thousands of pounds for charity later this month by riding from Land’s End to John O’Groats in just six days.

Jon Archer, Joe Hunter and Jack Quinlan are taking on the 1,000 mile challenge to raise money for The Alzheimer’s Society, in honour of family members who have been affected by the disease. 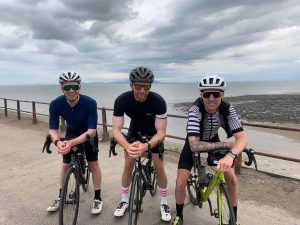 They will be setting off from the tip of Cornwall on Friday 23 July and aiming to arrive at the top of Scotland on the following Wednesday by riding an average of more than 170 miles every day.

The trio, who have known each other since school and who all live in and around Alnwick, have already raised over £1,300 of their £5,000 target.

RMT Accountants in Gosforth, where Jon works as a senior audit manager, is also sponsoring the team by meeting all their hotel and support vehicle costs.

Jon, Joe and Jack came up with the idea for the ride after spending lots of time out on their bikes during the various lockdown periods of the past year.

They recently completed their final long training session by riding 245 miles from Alnmouth to Maryport on the West Cumbrian coast and back again in around 18 hours.

Jon Archer says: “We’ve done various athletic endurance events together before, but nothing anywhere near on this scale, and we’re feeling excited and daunted in equal measure!

“Our training’s been going really well, with the run out to Maryport showing us that we’re in the right shape to take on an exceptionally long ride and still be ready to go again the next day.

“Our fundraising campaign has got off to a brilliant start and we’re aiming to raise £5,000 for a charity that’s very close to our hearts and does amazing work in helping both people with dementia and their families.

“RMT’s generous support takes care of the major costs of taking on this challenge and means we can concentrate fully on getting up the country as quickly as we can.”

Mike Pott, managing director at RMT Accountants, says: “It’s incredible just thinking about how much distance the guys will be covering in such a short time.  Their dedication, determination and fitness is hugely impressive and we’re very glad to be part of their support team.”

GETTING THE RIGHT REFINANCING RESULT